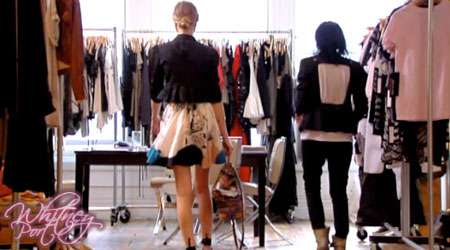 By now everyone knows how staged MTV’s reality programing is, but I’m consistently surprised as to the extent. I was reading Whitney Port’s Blog and there was an entry giving readers the run-down as to what she was wearing on The City’s first episode. Low and behold when Whitney goes to meet her old boss Kelly Cutrone from People’s Revolution she’s decked-out in an Alice McCall Dress and a Sass and Bide jacket — both brands just happen to be represented by People’s Revolution. Just another ingenious product placement that most are blissfully unaware of I suppose! As a side tidbit, I had lunch with a woman who used to work at People’s Revolution and she told me that not only did Whitney not really work there (unless you count the random tasks that were done for the camera), when Whitney and LC would come in to film for The Hills (1-2 hours a week), the crew would film using wireless cameras which made the internet cut-off so no one who really did work there could actually get any work done!