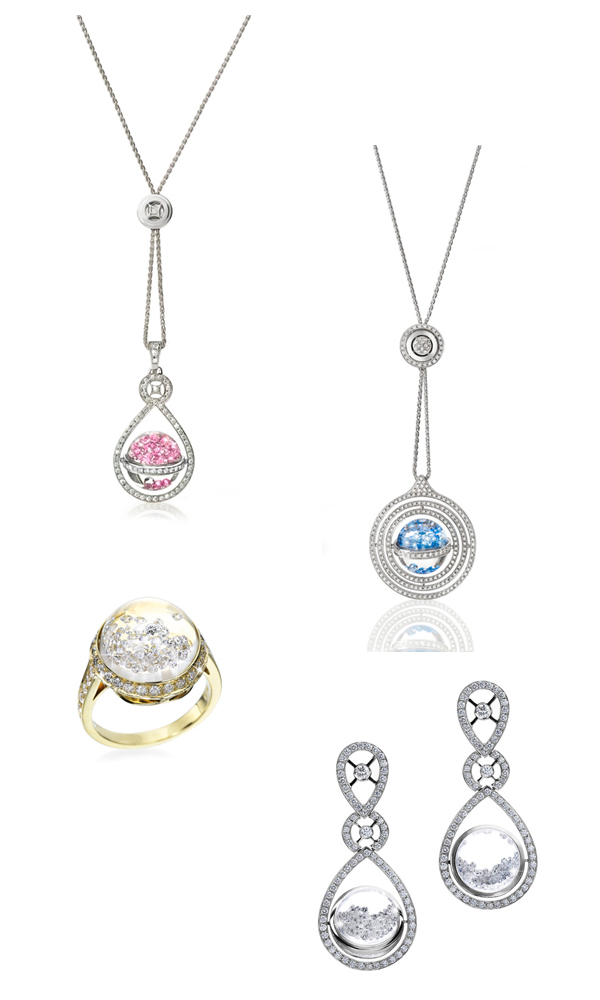 In 1902, Joseph Asscher invented the now famous Asscher cut, a stepped square style with cropped corners. While this remains one of the jewelry industry’s most beloved designs, his family didn’t stop there – they developed the Royal Asscher cut in 2001, naming it after their thriving diamond empire. The style plays off of the original only it has larger corners that create the appearance of an octagon. With the Royal Asscher’s latest collection, Stars of Africa, they’ve continued to innovate on a grand scale. My favorite pieces are the pendants, which look like galaxies of diamonds set inside orbs. I recently got dinner with Joseph’s granddaughter Lita (we have a mutual friend) and spent the whole time transfixed with her pendant.

The orbs spin on both the pink ($20,400) and blue ($28,500) necklaces, and the circles on the blue rotate, as well. The sight is breathtaking to say the least, and the rings ($7,600 each) are a close second in the race to win my heart. I love cocktail rings, and this one is an heirloom investment I wouldn’t mind making soon! The earrings ($25,800) come with another galactic-sized price tag, but considering they sparkle as much as a diamond the size of the orb itself (which also spins), it’s completely justified. Need a little more prompting? Well, the name Stars of Africa comes from the family’s initiative of the same moniker, which was launched in 2008 to help fund healthcare, education, and self-sufficiency programs in Sierra Leone. They’ve promised to donate at least $50,000 towards sending African students to the African Leadership Academy. Statement jewels for a statement-making cause – I just might have to indulge! Available at The Royal Asscher.