Sometimes the smallest bags make the biggest statements. The stone clasps on these Lanvin minaudières stick out quite a bit, adding a striking touch to the flask-shaped clutches. And okay, they won’t fit much at all, but look at them! What do you really need besides your phone and a card anyway? There’s the jewel-toned lizard La Nuit and the Piaf. The latter was inspired by France’s reigning songstress diva – Edith Piaf. Marion Cotillard won an Oscar for portraying her in the movie La Vie en Rose, the ultimate rags to riches story.

Here’s the gist – Edith’s mother abandoned her at birth, then her father went off to fight in WWI, leaving the tot to live with his mom in the brothel she ran. Obviously, this was not the ideal place to raise a child, and by age three, the effects became clear – Piaf went blind when a herpes infection brought on a case of keratitis. Fortunately her vision returned after she was removed from the brothel four years later. She went on to become a street performer, was discovered, and the rest is history. This really has nothing to do with the clutch, but what a great story! No wonder Alber Elbaz was moved. Now that I think of it, maybe this does have to do with the minaudière. The inspiration behind this gorgeous little bag makes me want it all the more! The La Nuit is available at Lanvin for $3,155 and the Piaf is on Matches

NEXT >
Snobs in the Press: New York Fashion Week Edition 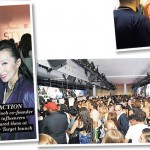