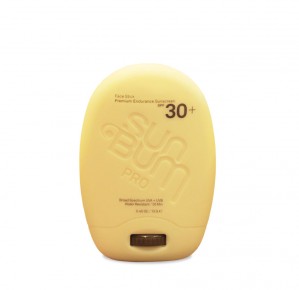 Hampton season has started which is great except… I can’t drive. While the studio where I like to workout has a location out East I can’t always get to a class because of my car situation (gah!!!), so on occasion I’ve taken to running outdoors instead. I’m very pale and prone to burning so it’s imperative that I have a sunscreen that can stand up to not only the sun, but sweat. Sun Bum’s Pro line (30 or 50 SPF), is awesome because it doesn’t melt into my eyes while I’m running. In fact it doesn’t melt anywhere even when I’m sweating. The true test will be later on in the season because it hasn’t gotten that hot yet, but I did wear this on a recent 5mile run and it was totally fine (ie I didn’t get sunburned so it obviously stayed on my skin!).

It’s also fragrance-free and moisturizing so it shouldn’t be a problem even for those with sensitive or dry skin and it’s formulated to protect against both UVA and UVB rays so you can use it year-round for protection (if you’re not protecting your skin from UVA rays year-round don’t bother spending money on anti-aging creams because you are creating damage faster than any cream will be able to repair it…just saying….UVA protection is crucial!!). The packaging is also compact so you can easily toss this in your purse and touch-up as needed throughout the day.